For the past several weeks, I’ve been in desperate need of a haircut. DESPERATE. I hadn’t had a cut since my Aveda Institute experience in October, so clearly it was time. Though I made it out of the Aveda Institute unscathed, I decided to try a slightly pricier, but still discount option.

Fringe Hair Studio is a wonky little salon within walking distance from my Georgetown pied-da-terre. I started going there after I became outraged at the unmemorable $90 haircut that my old salon gave me. Essam and his team are great. The place is understated, but the stylists know what they’re doing (unlike my friend from the Aveda Institute). And they are reasonably priced to boot!

I went to see Abbie last week to fix my sad situation. The Aveda cut ended up being a great one, but it had grown out too much. Abbie took the cut to the next level by adding more layers, so it has a bit more shape. Results are below (apologies for the sad photo – I’m terrible at self portraits). 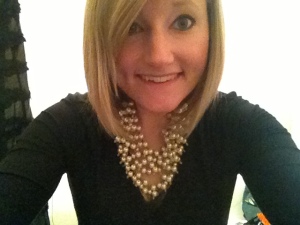 Tip for shampoo: $5 (the man had magic fingers. MAGIC.)

(Price differential between Aveda Institute is $56 – STEEP. But probably worth it for peace of mind, no?)

What do you think? Too expensive for what I got or is this the bargain of the century? I’m not above going to some other place that’s a better deal. Got an idea? Send it my way!

Turning the waste stream into a resource stream for local communities

Best Thing on the Menu

The Must Get When You Go!

Helping "it" girls find the best in affordable fashion!

Becoming Madame
red lips, muddy boots
Julip Made
The Pursuit of Style
The Discountess of Washington
Cupcakes for Breakfast

n. frugality; the quality of being economical with money or food.